Get In Touch
InfoNight/Astro Sessions 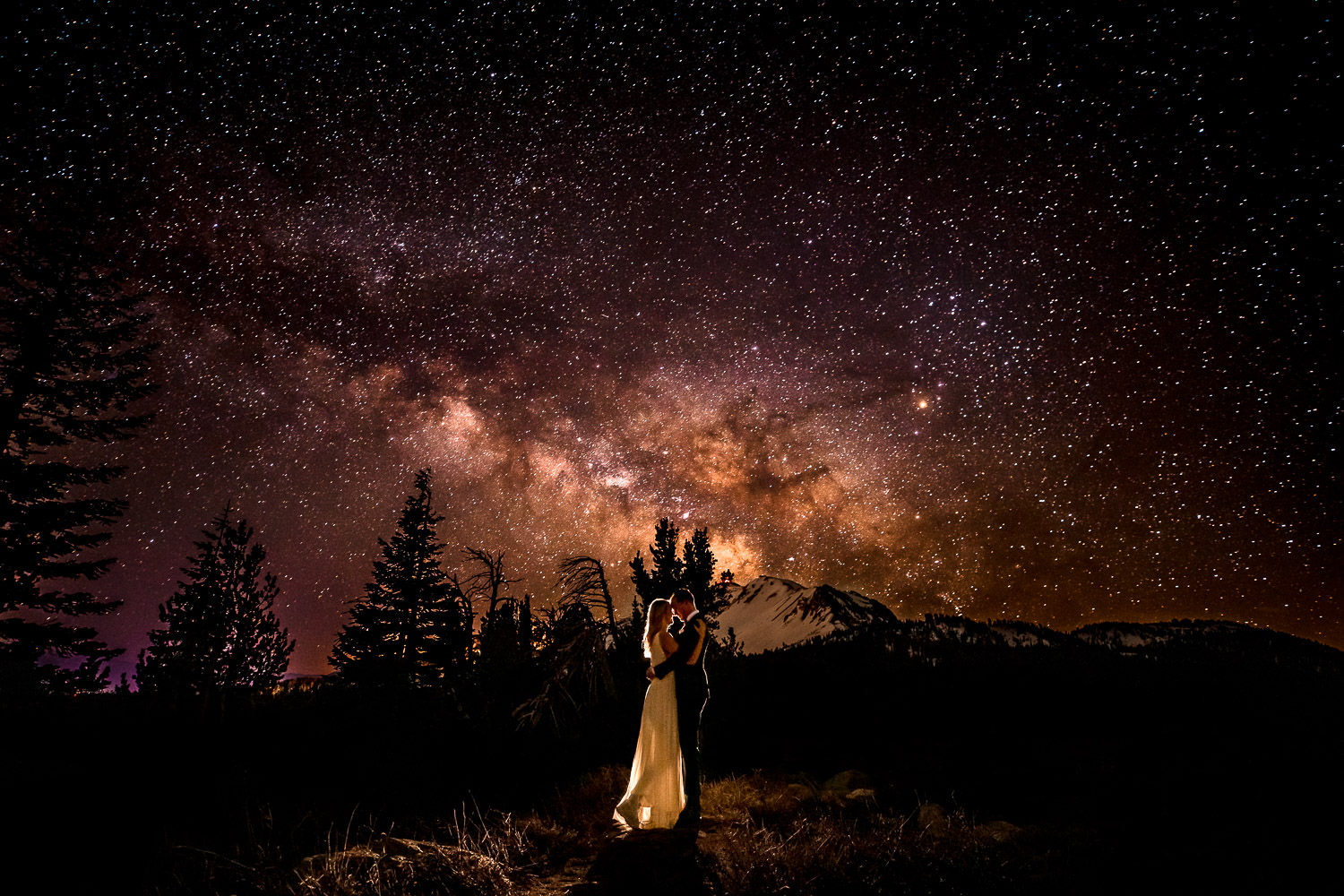 The Eastern Sierra is a legendary venue for astro photography.

Many of the world’s best dark-sky photographers spend time creating here and the region is known to be one of the best in the world for it. Custom Canvas Wall Art related to this theme in your bedroom can feast your eyes. Then think of late summer, when the nights are still warm, the Milky Way is still bright and the darkness comes early, workshop leaders bring international photo tourists here to shoot under our stretch of sky.

Here are the two primary reasons I think this is the best place on Earth to come for a couple’s portrait session under the stars:

1. We’re out in the middle of nowhere!

If you’ve ever spent a night at the local hot springs, you’ve instantly noticed how intense the stars are here—particularly if you’ve been out there around the new moon. Our ability to see the stars is heavily dependent on lack of ambient light from metropolitan areas. For all intents and purposes, we’re about 200 miles away from any real light-producing metro areas. Sure, Fresno is close if you’re looking at a map, but there’s an enormous light-dampening pile of rocks between here and there and no close roads to connect us. Mammoth is an island and that makes night photography here special.

The pristine night skies are an essential part of this equation—but it’s our wild local geology that makes the Mammoth Lakes area essential for landscape photographers in search of compositions you really can’t find anywhere else on earth.

The entire Highway 395 corridor in the Eastern Sierra runs straight and fast through the high desert at the base of the country’s tallest peaks outside of Alaska.

In Lone Pine, about two hours south of here, you gaze up at 14,505 ft. Mt. Whitney from the valley floor almost 11,000 feet below. It’s that kind of dramatic upheaval that brought the OG California influencer, Ansel Adams, here in the middle of the last century.

Our volcanic history has made the valley a museum of geologic wonder, with spots like the Alabama Hills, The Buttermilks, The Ancient Bristlecone Pine Forest and Mono Lake creating compositional opportunities that rarely exist anywhere else.

This could be you!

What does this mean for couples coming to Mammoth to make rad photos? What could be cooler than doing an engagement session, couple’s photos, or end-of-night wedding photos with Milky Way firing away overhead? You can’t do that in most places so lets make it happen here!

I encourage all my Mammoth wedding couples to give me 20 minutes at the end of the night to do one of these. I’ve got great spots for it at every local venue. Plus it’s proven to be a great chance to take a breathe in some cold, quiet mountain air after a day of constant extroversion. Not everybody wants to leave the party to shoot more but for those that do, it’ll be worth it.

Things to think about:

We can do astro portraits any night of the year but certain seasons and times of the month are better than others.

The first thing to think about is the season.

Summer is Milky Way season in the northern hemisphere so if you want that, plan to come between May-September.

You can’t see the Milky Way core in the winter but the stars are still awesome and we can shoot at dinner time since it’s dark around 5:00 for much of the winter.

Here’s a great chart and site explaining how that works from Dark Site Finder:

The second factor in doing this, and perhaps easier to control for our schedules, is the moon phase.

Lots of couples plan their weddings with a full moon in mind but astro photography is best done when the moon is new. The ambient light reflected off the moon lights up the sky and inhibits our camera sensor’s ability to render details in the stars.

It’s obviously best the night the moon is smallest but the week around the new moon works as well.

Clearly we can’t always plan life around the moon, and that’s fine. Several of my favorite night shots have happened with a nearly full moon. Light reflecting off the moon has a unique way of subtly lighting up the landscape here and the long exposures are really cool when there’s water or clouds moving through the sky.

How does it work?

Night portraits are tricky and have taken me several years to master but the process is fairly simple. It starts with finding a spot free from ambient light coming from cars, buildings, people, etc.

This is easy if we’re doing a couple’s session and can go anywhere we want, but weddings require more planning. I’ve got spots at all the main wedding venues at Mammoth such as Convict Lake, Mammoth Mountain (McCoy Station is awesome) and June Mountain.

Next comes the technical side behind it. If we’re shooting close to the new moon, the exposure lasts for about 30 seconds. I’ll ask you to stand as still as you can during that time but it’s not a problem if you move around a little bit. It’s typically freezing at night and, if it’s the wedding night, you’ve been drinking for at least six hours so standing completely still is out of the question. The combination no ambient light and the pop of the flash half way into the exposure will keep you from becoming a blurry figure in the night.

How do we plan and book a night session with you?

I offer astro photography portraits to all my wedding couples as an epic way to end the day.

If you just want to come to Mammoth and make killer night shots, let’s figure it out. Check google for the moon phase and remember that we can do these much earlier in the winter than summer.

We only need about an hour to shoot which is just about right because, even in the summer, nights at this elevation are predictably chilly.

And that’s it. Like what you see? Reach out with the button below and let’s scheme up something epic.

Also click right here to check out a blog post from a Spring 2020 Milky Way shoot near Mammoth Mountain.

Let's go shoot in the dark!

SCROLL DOWN FOR MORE 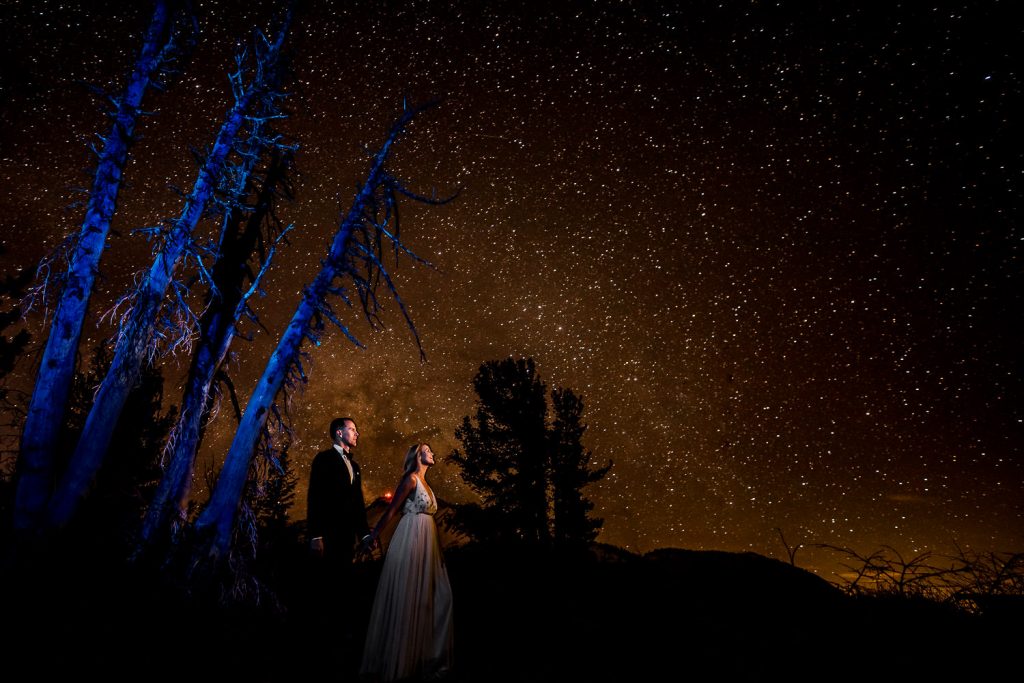 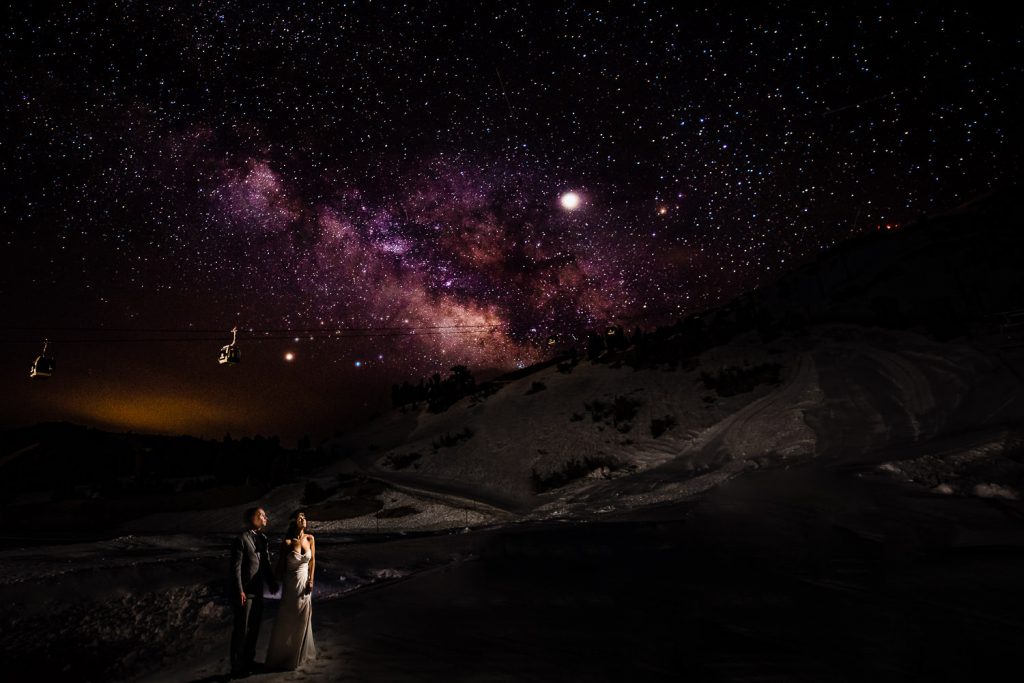 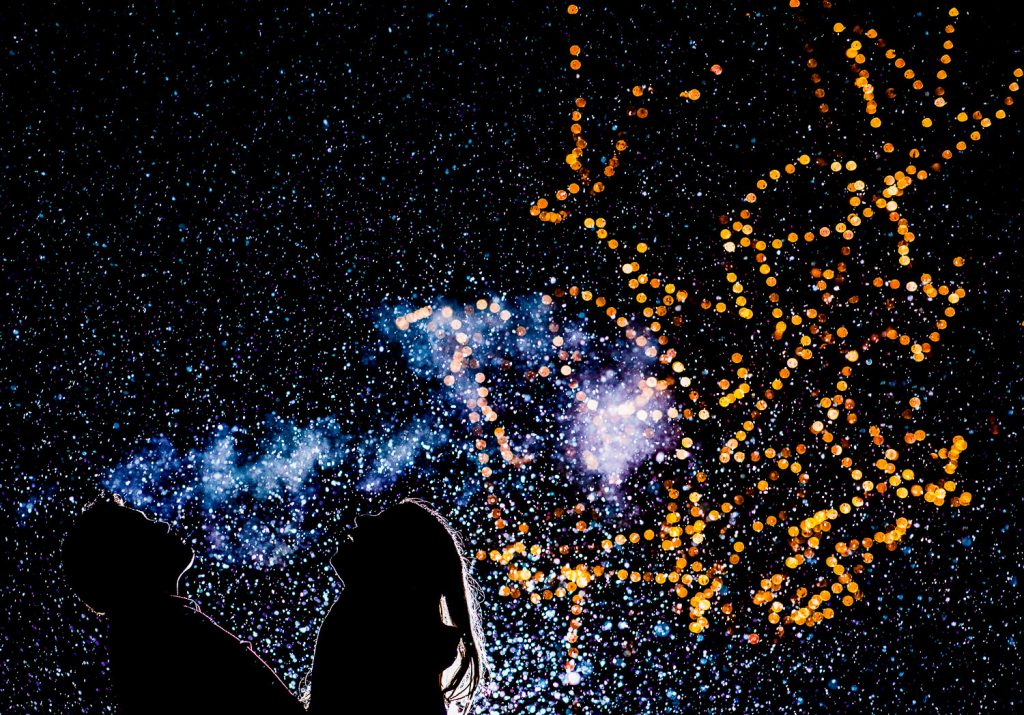 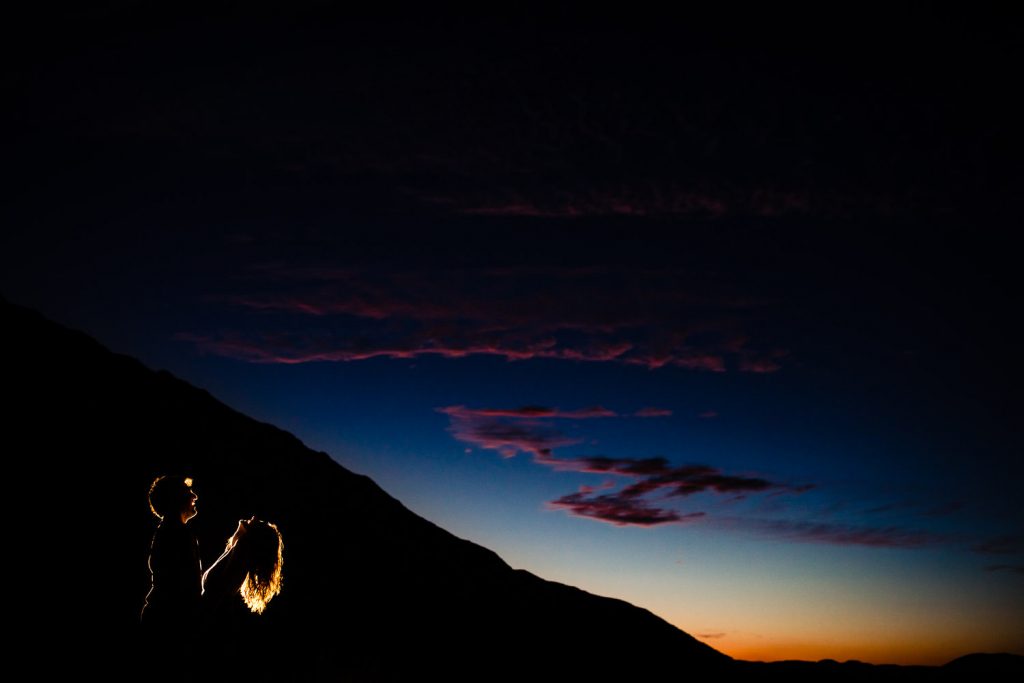 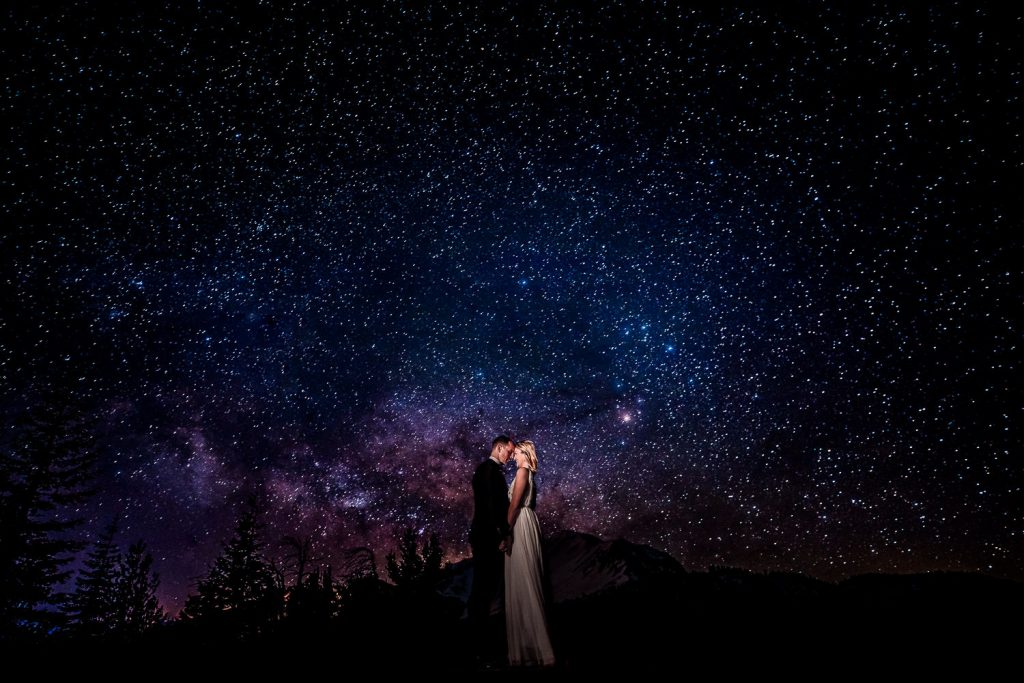 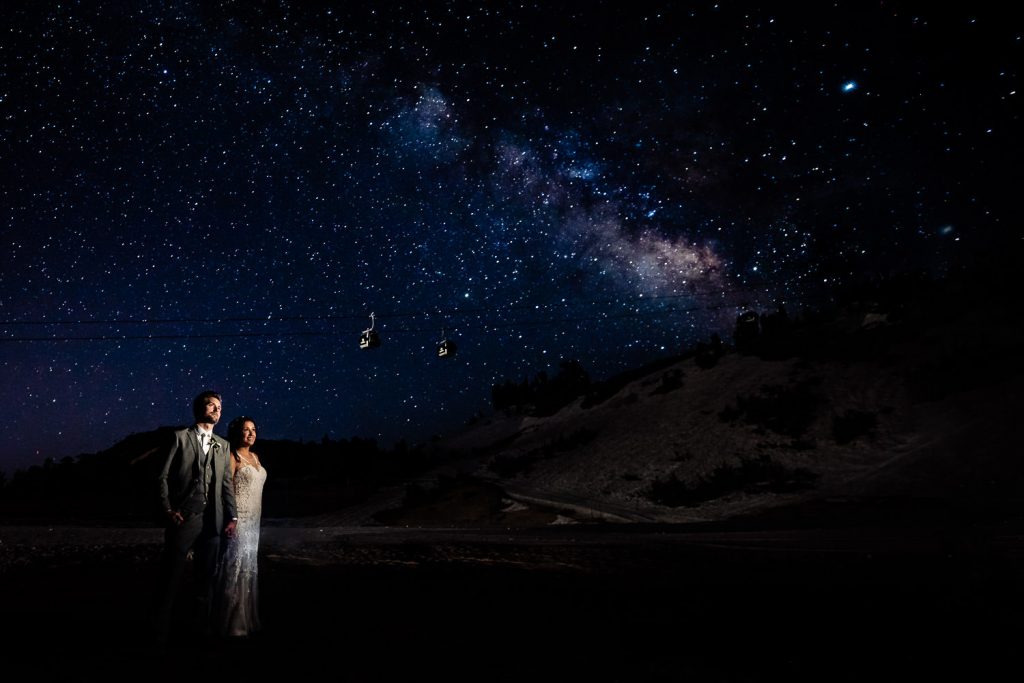 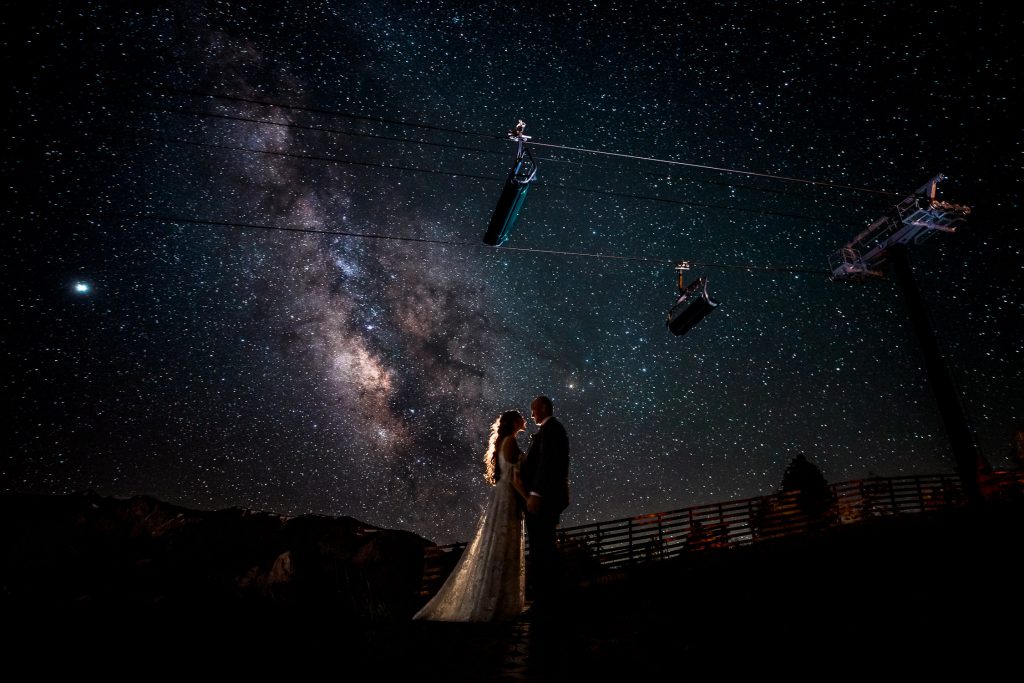 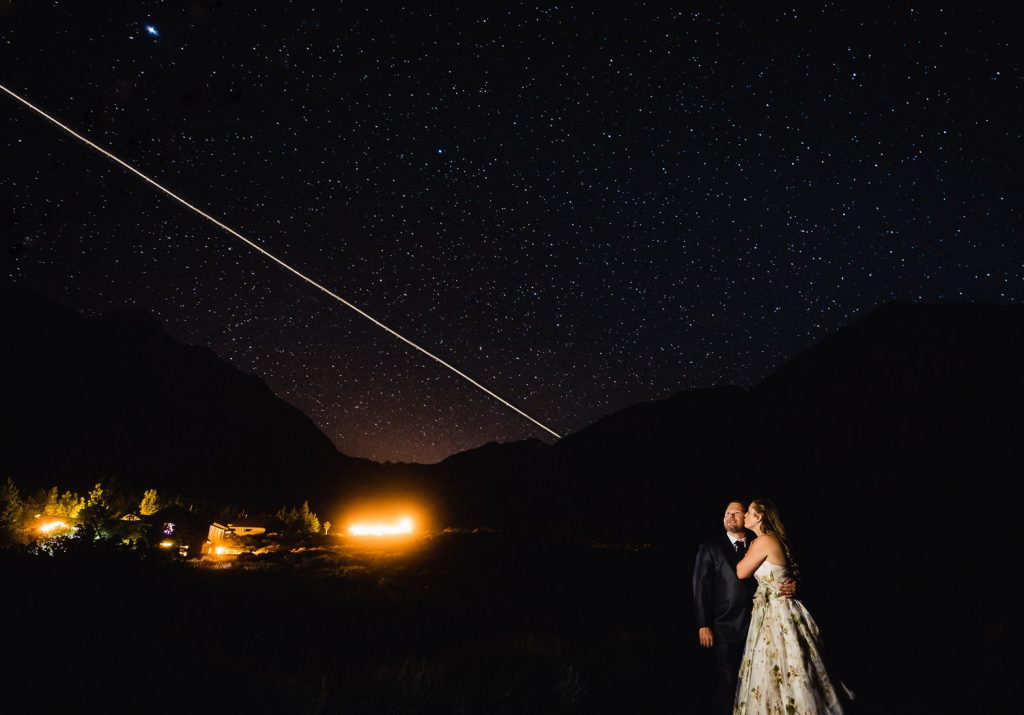 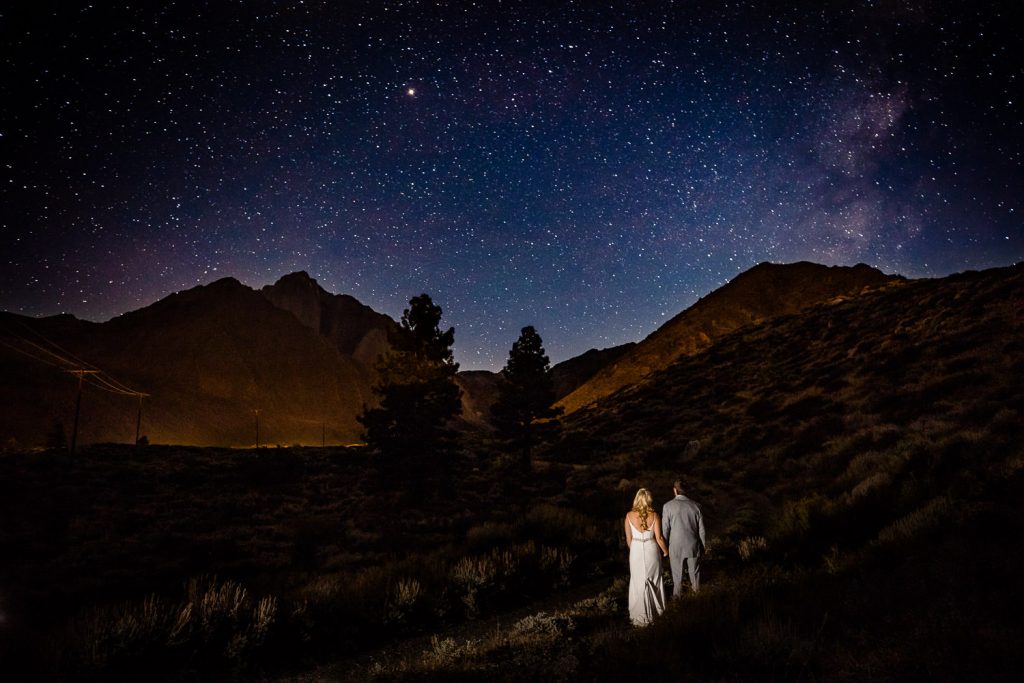 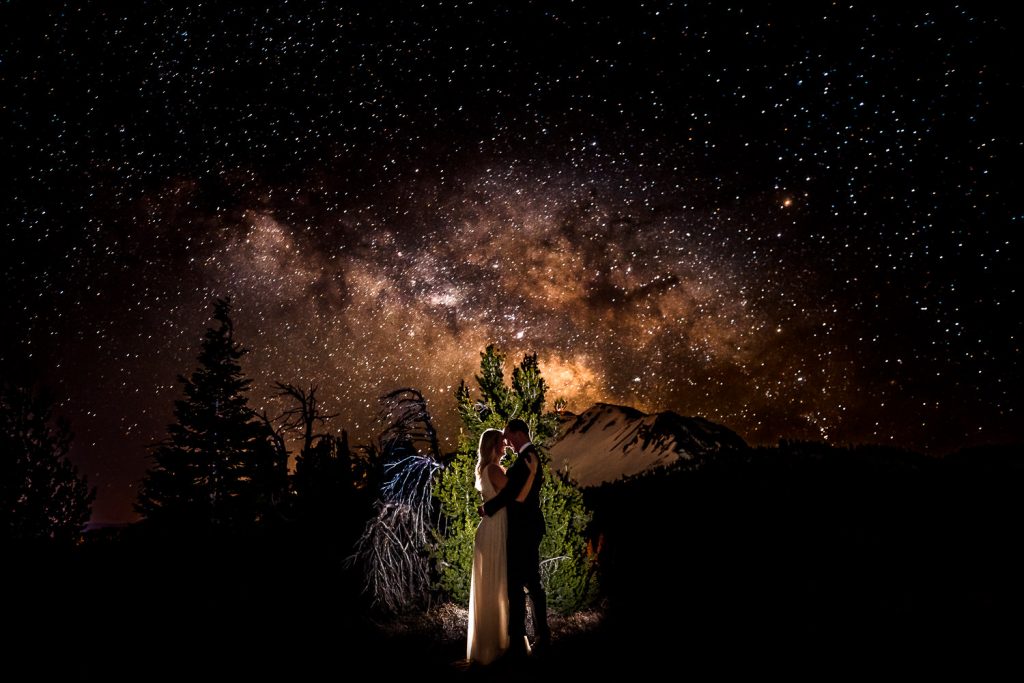 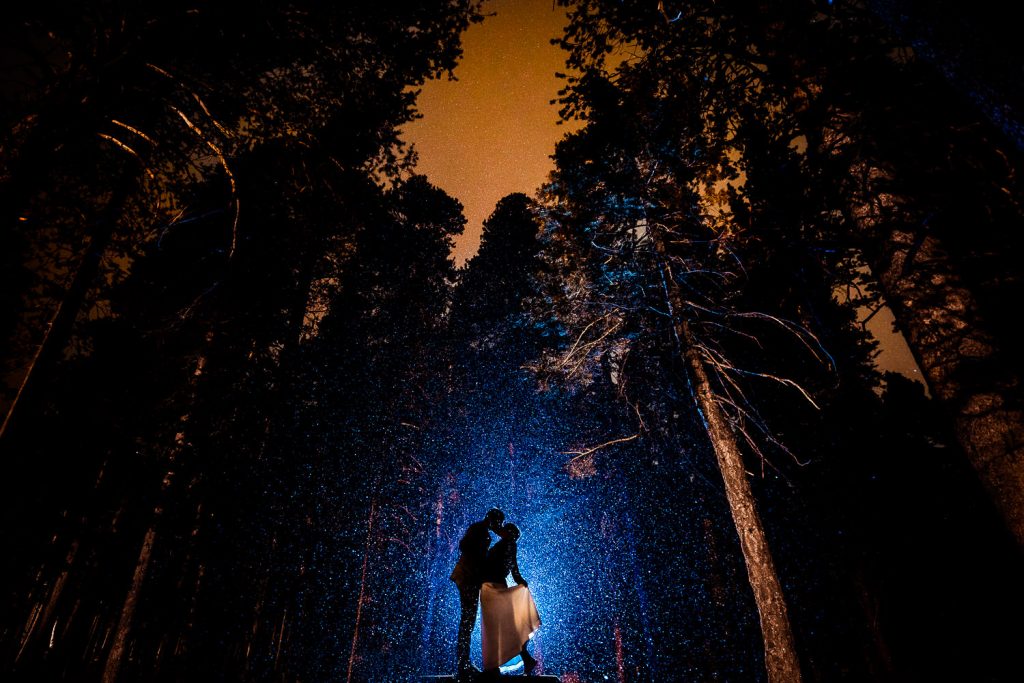 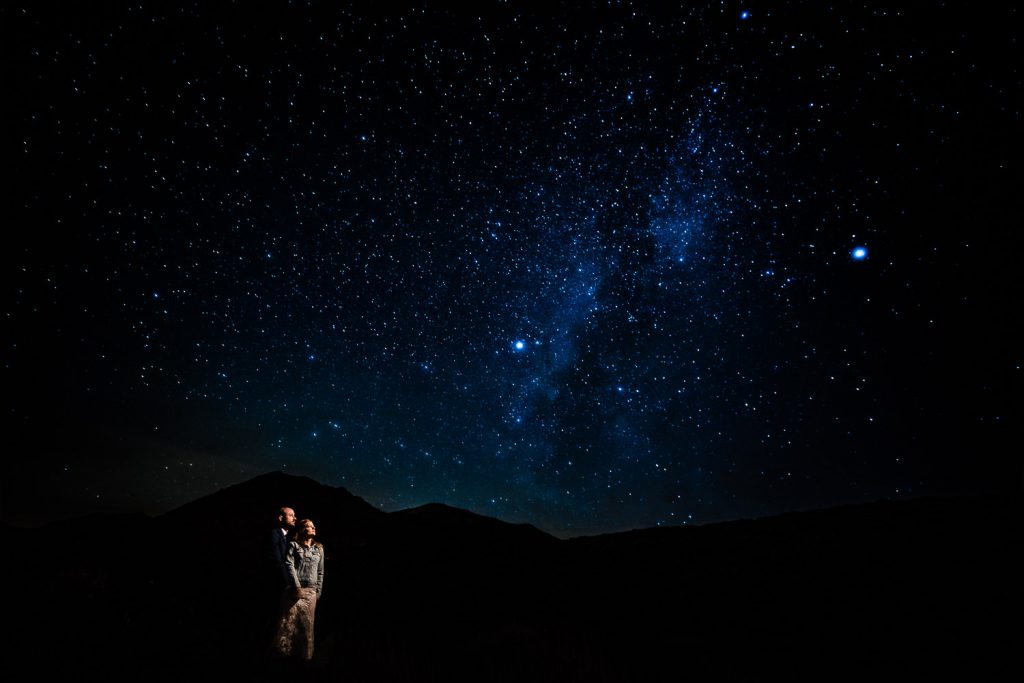 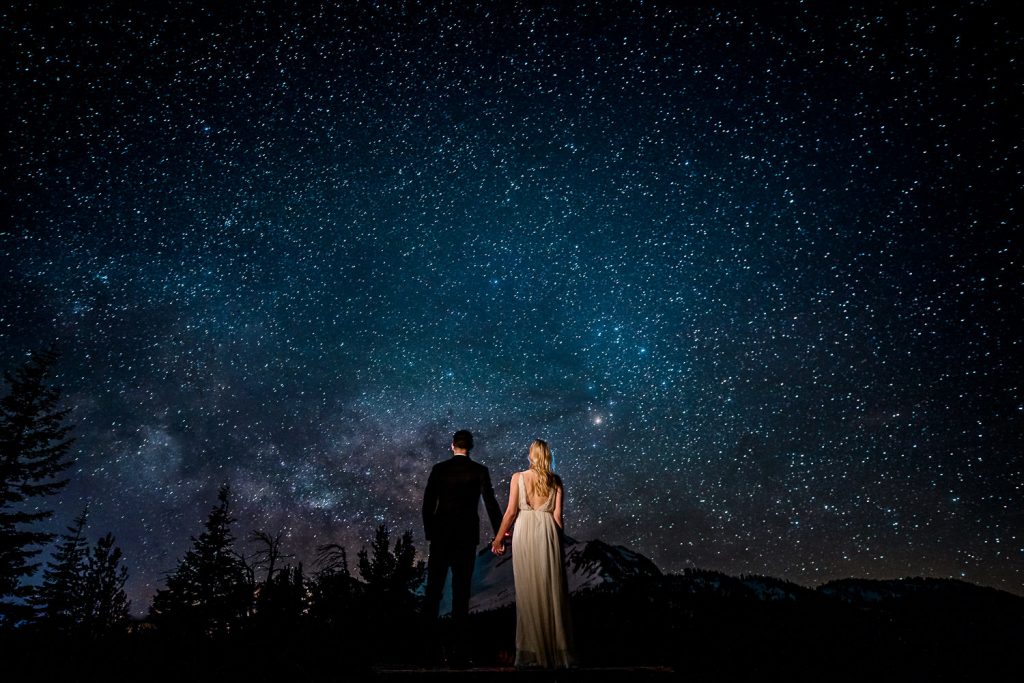 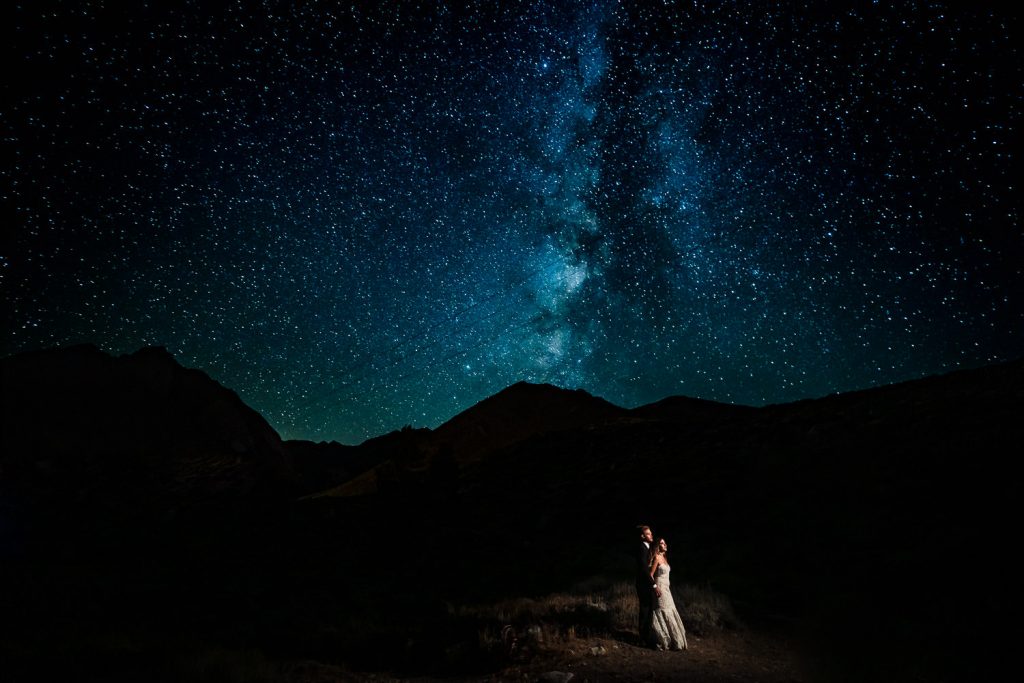 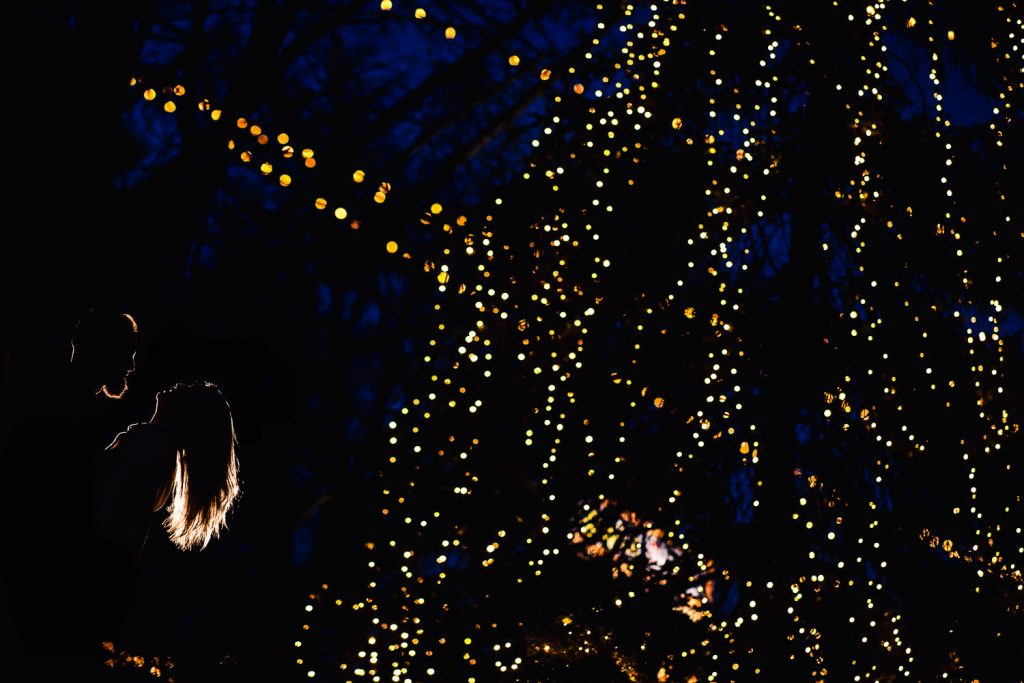 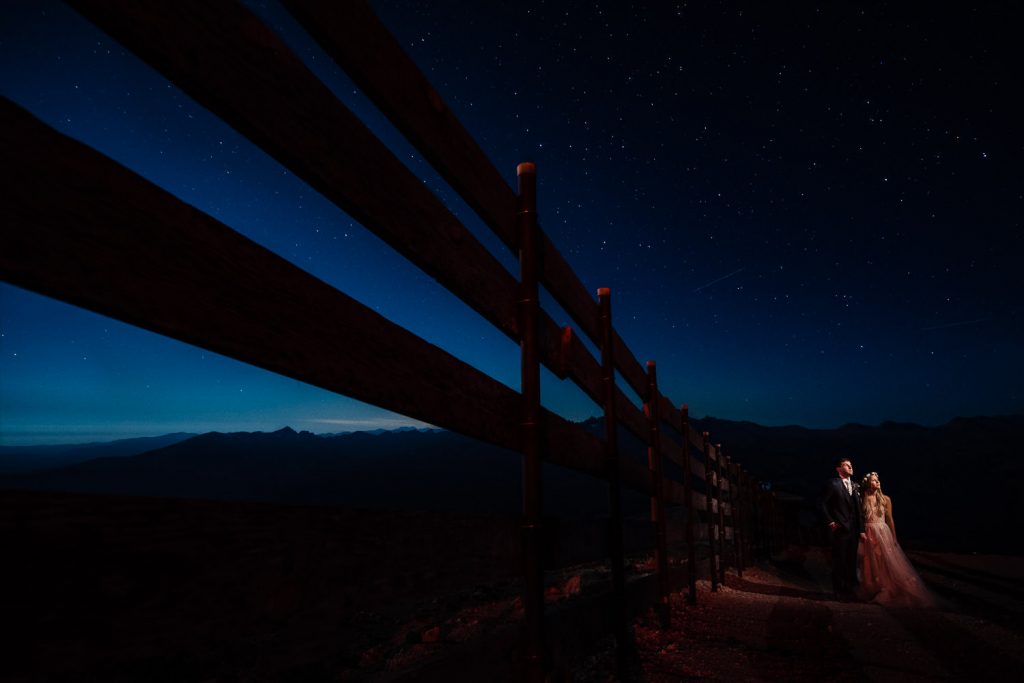 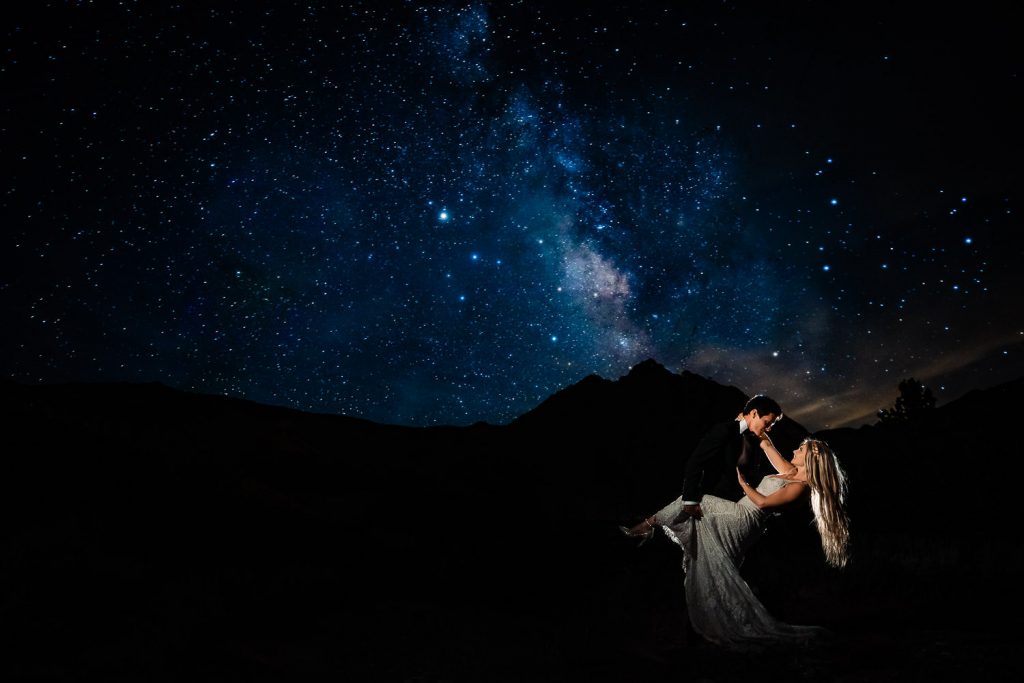 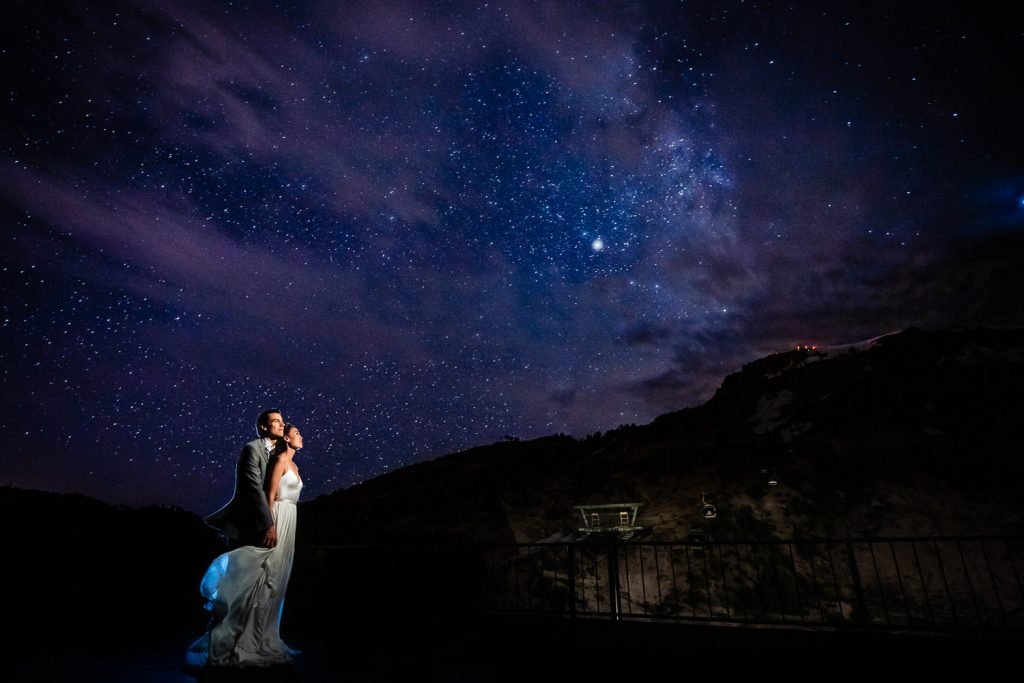 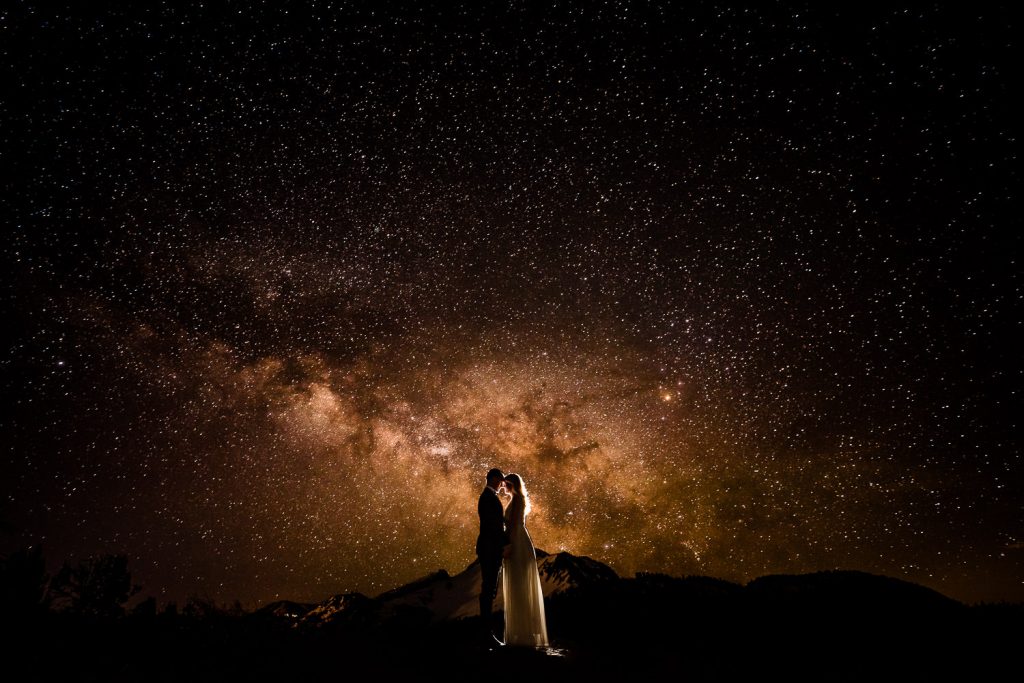 A touch of synthetic in a mural of natural… #min

This California heat wave ends today, and there’

The path to this Mammoth wedding venue is perhaps

The last button press of the evening. #minaretphot